These sweet and tangy macaroons are made with fresh lime zest and lime juice, as well coconut and aquafaba – the liquid found in a can of chickpeas which is used as an egg substitute in many vegan recipes. A pinch of sea salt brings out the lime, which mingles nicely with the sweetness of the coconut, giving it a refreshingly sweet taste.

Brittany Sellers, one of the experienced chefs in our kitchen at the Slater Center, already offered some vegan medical edibles – including hard candies, lollipops, canna brew, pills and tinctures. But many patients asked for vegan baked goods, especially given the wide variety of cookies, brownies and other treats already on the menu.

Since macaroons are one of her personal specialties, Brittany began researching and experimenting with various recipes for vegan macaroons, tweaking the ingredients “to make it interesting.” She settled on the key lime coconut macaroon because it had a refreshingly different taste.

The first batch of key lime coconut macaroons hit the shelves earlier today. Each macaroon contains 10 mg of THC, the same as many other baked goods offered to our patients. They’re not as chewy as traditional macaroons, she noted. “They’re still a little crunchy on the outside and a little soft in the middle and you get that nice taste of lime,” she noted.

The key lime coconut macaroons join a host of other medical edibles adapted into specialty products at the request of our patients, Brittany said. For example, they created a gluten-free chocolate macaroon that has been a favorite since it was introduced several years ago. There are also sugar-free brownies and sugar-free candy chews.

These and other medical edibles are available only for Slater Center patients, who use cannabis medicine to help them cope with a variety of debilitating medical conditions. You can see our complete list of flower, concentrates, edibles and other medicine on the menu page of our website.

The Slater Center welcomes all approved medical cannabis patients from any state. Let us help you live better – naturally. 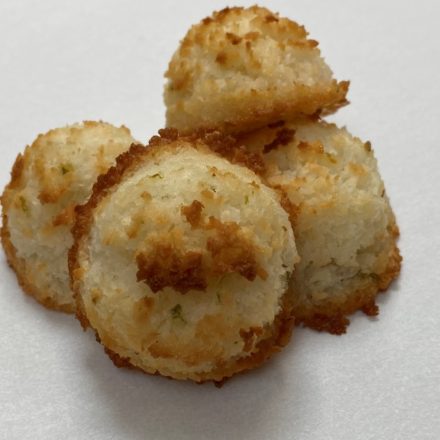