Tina, an MS Patient at the Slater Center, Explains How Medical Cannabis Helps Her Cope with Multiple Sclerosis

By the time Tina was diagnosed with multiple sclerosis about 10 years ago, she’d lost the vision in one eye and suffered optical nerve pain that was at times debilitating.  She also had trouble walking and had cognitive impairment that made it difficult for her to focus, read and even speak.

A friend recommended that she try using marijuana to relieve the pain, even though it was illegal to use at the time. She resisted at first – she vehemently opposed the use of any illegal drugs. Her husband and teenage sons also were against the idea, saying they didn’t want her “to turn into a pothead.”

But desperate to find relief from her symptoms, she bought some marijuana from a dealer on the streets and was amazed at how much it helped. Using marijuana helped ease the pain in her optic nerve and soon she regained some of the sight she had lost.  It also helped her think and speak more clearly and made it easier for her to walk and get around. Even her husband and sons saw how much it helped.

Tina said she was thrilled when the Thomas C. Slater Compassion Center opened in April 2013 as the first medical cannabis dispensary in Rhode Island. She never knew there were different types of marijuana – she just used whatever she could get illegally on the streets.

She said the Slater Center staff members were caring and kind – “they treat you like family.” They took the time to explain the different strains and varieties of cannabis. They also described the different types of cannabis medicine available – flower, concentrates, edibles and topicals – and how they were used. Most important, they helped her choose the best cannabis medicine for her particular needs.

“I didn’t know exactly what I need until I came to this Thomas C. Slater Compassion Center,” she said. “It opened a whole new world for me – I could have one strain to go to sleep and another strain so I could get up in the morning and function normally.”

She uses sativa during the day to help with pain relief, as well as helping with her cognitive and physical disabilities. Using indica at night helps her sleep, while providing relief from the relentless muscle cramps that wrack her body throughout the night.

Tina said she’s sharing her story to help spread awareness about multiple sclerosis – and how using medical cannabis can provide relief from so many of the symptoms. She knows that some people may be hesitant to try it, just as she was, but she says she’s proof that it can help.

She said her family members also support her use of cannabis medicine after seeing how much it has helped her deal with her MS – “that Mom could see and walk and talk and was healthier again.”

Best of all, she said, she no longer relies on nearly a dozen different prescription medications to manage her pain and other symptoms because she’s cannabis medicine is a way for her to feel better – naturally. “It’s saved my life, basically.”

Listen to her story in this video: https://slatercenter.com/slatercenter-com-how-medical-cannabis-helps-ms-patient-at-slater-center/ 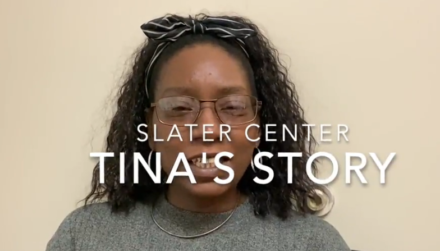